Spotlight on the bugle and Third Light at the Minack 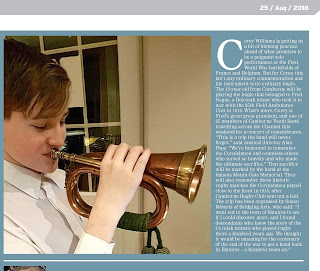 Great to see an article in the Western Morning News on Saturday 25 August - talking about Camborne Youth Band's visit to France and Belgium over the weekend. Journalist Simon Parker wrote about Corey Williams, who was taking his great great grandfather's 100-year-old bugle back to France.
Simon has a special interest in World War One and brass bands as he's also a playwright. His wonderful play Third Light is on at the Minack in Porthcurno in September. St Pinnock Brass Band will be playing. 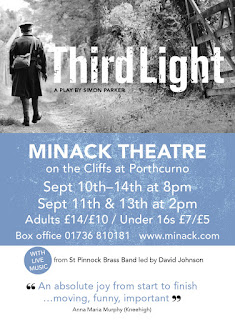 It's about the Cornish village of Herodsfoot in East Cornwall, where every one of the community's 13 men who went to war came home again.

There were only 53 villages in Britain where this happened. These villages were known as 'thankful' villages.
An intriguing title ..... Simon said: “People of an older generation may know the significance of a ‘third light’. Everyone else will have to come along to The Minack and find out for themselves.”

There are evening performances of Third Light at The Minack in Porthcurno from September 10 to 14, with matinees on Tuesday and Thursday. For tickets visit minack.com or call the box office on 01736-810181.
Posted by Susan Roberts at Friday, August 31, 2018