Crossing the channel and hundreds of Cornishmen with no known grave 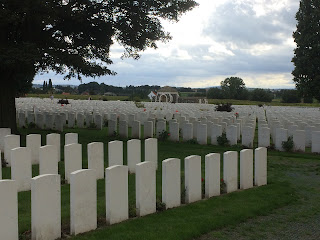 A big day today - setting off to France and Belgium to make last minute preparations on the ground for Camborne Youth Band's historic trip to the Western Front which starts tomorrow.  Tyne Cot cemetery near Ypres is an overwhelming sight: 12,000 graves - 8,300 of them unidentified.
And then  - looking for Cornishmen with no known grave - we find very many familiar names of men who served in the Duke of Cornwall's Light Infantry.  Lesley Carlyon of Rinsey Cross died this very day, aged 23, in 1917. So did his comrade at arms, James Roskruge, also of the DCLI (place of birth unknown).
Maurice Treloar of Chynale, Sithney, died on 24 August 1917 - tomorrow will be the 101st anniversary of his death.
And very close indeed to home for me - John Trevenen of Crenver Farm, Crowan, just a few miles from Chynale, died aged 21 in October that same year.
So many familiar names - so far from home. The bodies of these men have never been found. They made the ultimate sacrifice and their families didn't even have a body to grieve over.
The Band will visit this cemetery this Sunday before playing at the Menin Gate at the daily evening ceremony. They will take a Cornishman's 100-year-old bugle back to the battlefields: what a moving tribute to those who died. 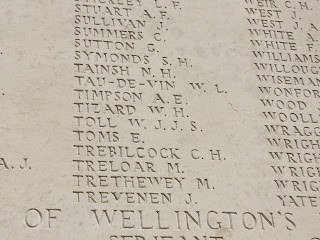