Next steps for skateboards and a meeting in Camborne 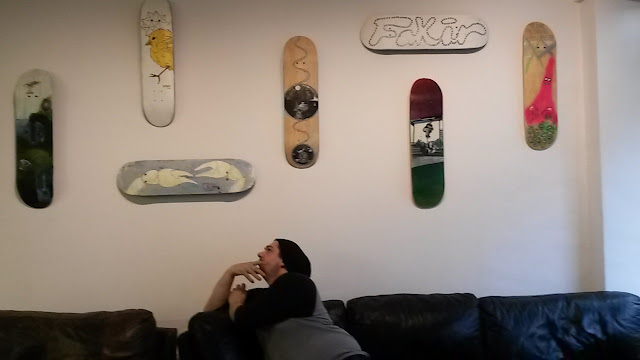 A great meeting in Camborne, Cornwall, with the impressive and imaginative Tom Hudson of Roots Skateboard shop. Tom has put our Whatever It Takes skateboards on display and we're thinking about next steps: hopefully, a new competition. Tom striking a great pose for this photo.... 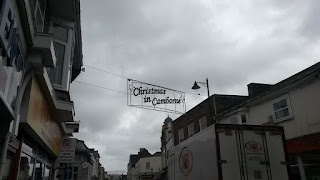 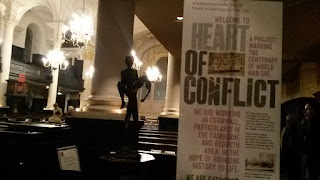 Great to see a good audience yesterday at a fundraising concert at St Martin-in-the Field, Trafalgar Square, supporting Bridging Arts and St Gregory's Foundation (which works with vulnerable people in Russia and the former Soviet Union).
The programme was Rachmaninov's Vespers by the chamber choir Illumination, conducted by Alexander Campkin. It was a very calming end to the day in a beautiful setting.
This was part of the Brandenburg Choral Festival of London. A huge thank you to the Festival and the tireless Claudia Jenkins, who organised this, as well as to everyone who came along and supported us.
Posted by Susan Roberts at Friday, November 20, 2015

Post-war act extended vote to women and all men

The 1918 Act is, rightly, most famous for having brought more than eight million women into the electorate; but, for the first time, it also enfranchised more than five million men over the age of 21 without regard to property or class.
Introducing the Bill, the Home Secretary George Cave said: “War by all classes of our countrymen has brought us nearer together, has opened men’s eyes, and removed misunderstandings on all sides. It has made it, I think, impossible that ever again, at all events in the lifetime of the present generation, there should be a revival of the old class feeling which was responsible for so much, and, among other things, for the exclusion for a period, of so many of our population from the class of electors. I think I need say no more to justify this extension of the franchise.” 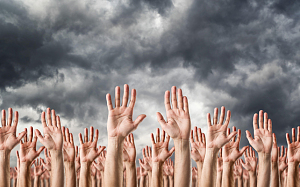 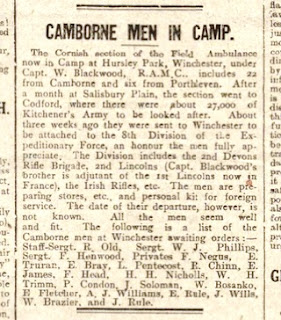 Alison Pooley of Illogan, Cornwall, has been in touch to tell us that she is the granddaughter of Lesley Rule Pentecost, who played in the three rugby matches on the Front after Camborne Rugby Club sent out a ball. Information about these matches came to light during research for Heart of Conflict.


"Mum had always told us that Grandad had played football on Christmas Day and that he had been a member of St John's Ambulance Brigade and signed up with Captain Blackwood of Camborne," she says, but no one had known any further details.


Putting pieces together after hearing a feature on the matches on BBC Cornwall on Remembrance Day 2015, Alison realised that the Pentecost in the team line up was in fact her grandfather. He had lived in Ennis Road, Camborne, and gone to the Front in 1914 with other members of Dolcoath Ambulance Brigade, under Captain Blackwood.


He survived the war, though was taken prisoner by the Germans for the later years of it. He made friends while in France and often wrote home: Alison still has the letters. He also named his daughters Denise and Louise - French names.


On his return, he married Alison's grandmother, Lily Uren, of Beacon whom he'd met before the War.


Lesley Pentecost survived the war and went on to become honorary secretary of the local Old Contemptibles Association.
Posted by Susan Roberts at Wednesday, November 18, 2015


The Gangmasters Licensing Authority is launching its first-ever accredited training scheme to protect workers from exploitation.
This is much needed, as we found when we worked on I Packed This Myself with migrant workers and farming communities in Cornwall.
Posted by Susan Roberts at Monday, November 16, 2015

Email ThisBlogThis!Share to TwitterShare to FacebookShare to Pinterest
Labels: Gangmasters Licensing Authority, I Packed This Myself 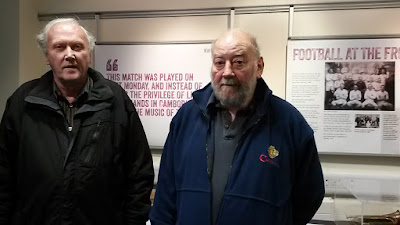 So good to hear our Heart of Conflict story on BBC Radio Cornwall this morning featuring Chris Negus and Derek Head, the grandsons of two of the men who played in rugby matches on the Front after Camborne Rugby Club sent out a ball. Here's the link if you missed it.
Posted by Susan Roberts at Wednesday, November 11, 2015

More photos from our pop-up exhibition in Camborne 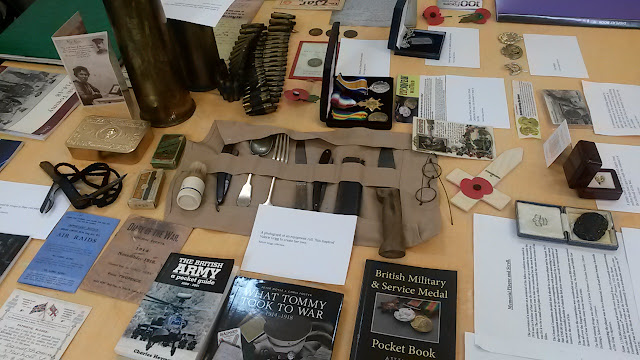 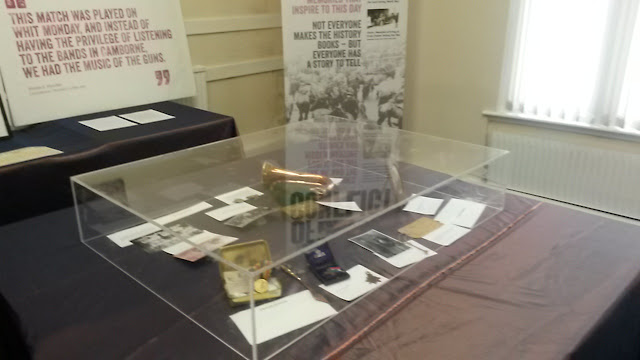 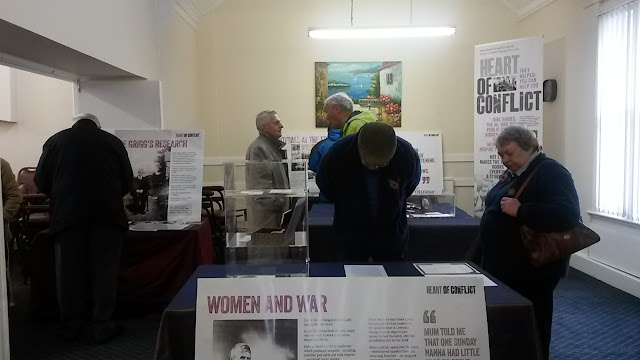 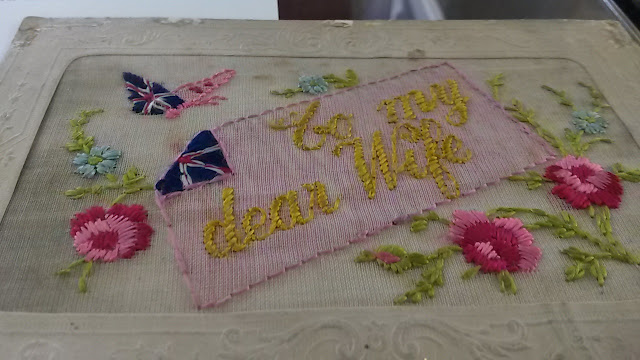 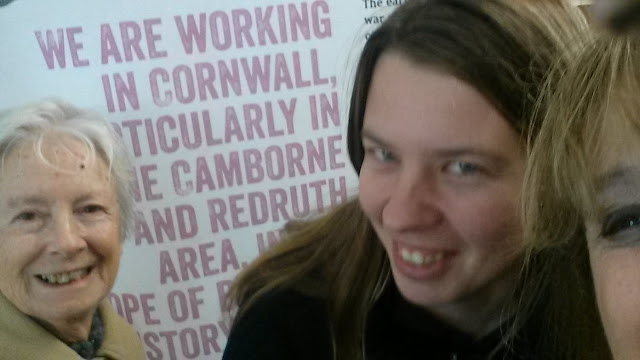 Heart of Conflict in Camborne

A rainy morning in Camborne as we set up our Heart of Conflict pop-up show. But it's looking great ... it's the first time we've done pop-up shows and the graphic panels and banners really help to make it come together. 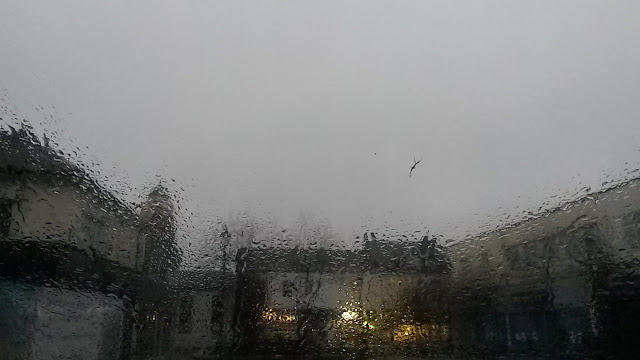 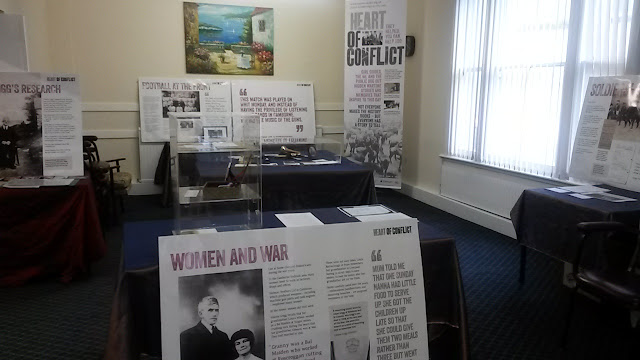 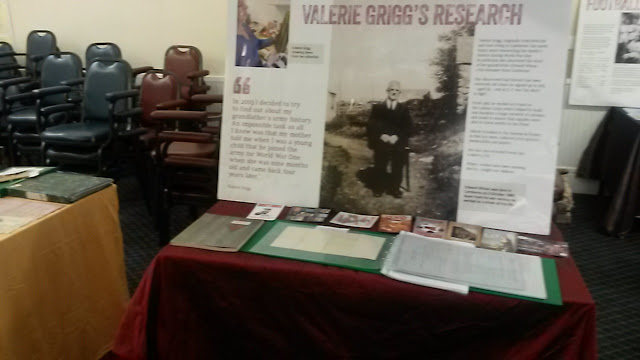 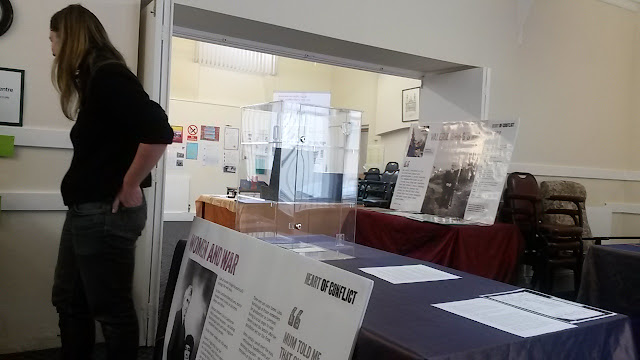 The history of World War One at Penponds

An excellent evening at Penponds Church near Camborne, Cornwall, tonight looking at the history of the unusual WW1 memorial in the church porch. Many thanks to Craig Carey-Clinch and Carol Richards who talked about their research. Part of Heart of Conflict www.heartodconflict.org.uk #heartofconflict 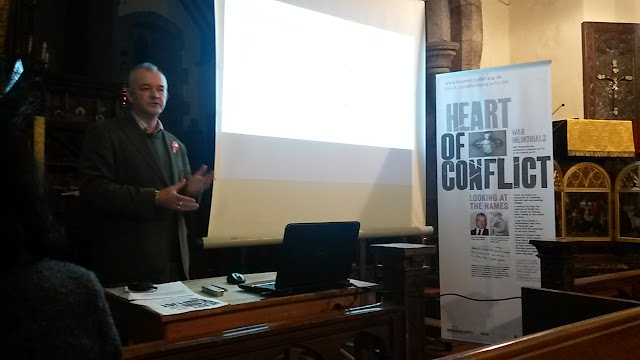 Interesting to see Herbert E Butler's The World War 1 Homecoming at Helston Museum's exhibition this week. The painting is on loan from the Royal Institution of Cornwall - and features in an Open University course on the changing face  of heroism. There's no jingoism or propaganda here.

Praise for Heart of Conflict

A surprise mention for Heart of Conflict from veteran tabloid editor Neil Wallis in his podcast for Talk2MeRadioUK  - click here.
It's long! But you can fast forward to minute 23 and beyond to hear how moved he was to hear the stories of Cornish heroism in World War One.
Posted by Susan Roberts at Wednesday, November 04, 2015 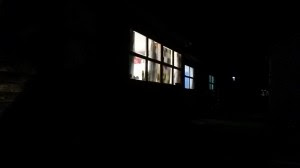 A huge thank you to our volunteer, Rose Taylor, who led a wonderful writing workshop at Camborne Guides who have worked with us on our Heart of Conflict project. The Guides created various pieces of work around memory, in particular messages to soldiers who went fight in World War One a century ago.
We'll put these on display at our pop-up exhibition at the Donald Thomas Centre, Camborne, this Saturday 7 November.
Thank you, too, of course to Guide leaders Sue Norfolk and Karin Saunders for helping to arrange this.
Posted by Susan Roberts at Tuesday, November 03, 2015 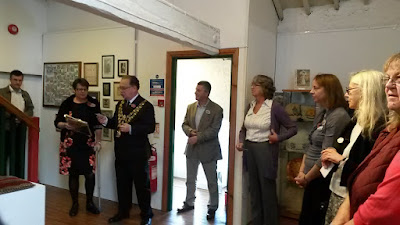 A lovely opening this morning of Helston Museum's latest World War One exhibition. A tribute to everyone - and to Martine Knight in particular (above, left, in a poppy print dress beside the Mayor).
Splendid refreshments! (below).
﻿
﻿﻿﻿﻿