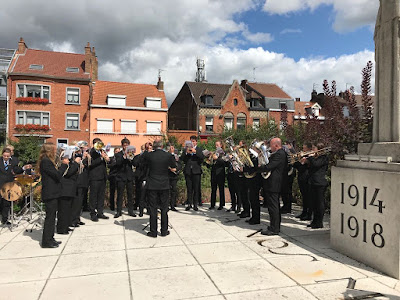 The war memorial at Estaires where Camborne Youth Band played today and laid two wreaths - one in memory of Allied servicemen who served in World War One and the other in memory of French friends who died. (The names of many French are engraved on flagstones by this memorial).
Alan Pope, conductor, and band member Hannah Viant laid wreaths and the Band played the Last Post.
Particularly poignant: Corey Williams played a 100-year-old bugle that belonged to his great great grandfather, Fred Negus,  who served in the Royal Army Medical Corps in Estaires from 1914-16.
One hundred years ago, Fred Negus and fellow Cornishmen organised three rugby games between Devon and Cornwall teams. Writing back to the West Briton, they said that they played to the 'music of the guns', not the music of the bands in Camborne.
100 years on, there was the music of Band from Camborne in Estaires today - not the music of the guns.
It was a fantastic tribute to so many men who served so bravely in a truly terrible war.