Meeting with Bishop of St Germans 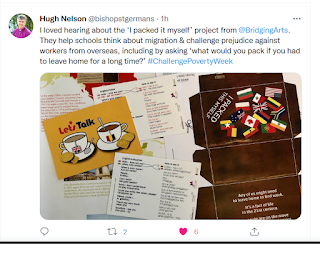 So pleased to be able to talk to the Rt Rev Hugh Nelson, Bishop of St Germans, today about our project I PACKED THIS MYSELF.

It was a really good meeting: huge thanks to Bishop Hugh for taking the time to listen and for his enthusiasm.

We're just starting to roll out plans for workshops in schools after the long months (years!) of the pandemic.

Posted by Susan Roberts at Tuesday, October 12, 2021 No comments:

Back on the road with lectures.... 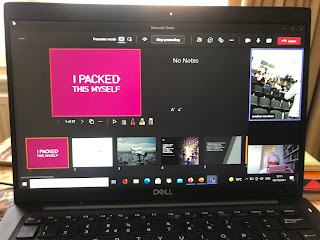 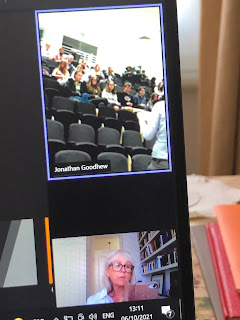 The wonders of the internet - in this case, Microsoft Teams!

It was great for us to be able to give a lunchtime lecture at Callywith College, Bodmin, Cornwall, this afternoon (Wednesday 6 October 2021).  Mirabela, a Romanian lawyer now living in Helston, joined me to talk about migration and the hostility and prejudice often faced by migrants.

Some very good questions from students and  - best of all - someone coming up at the end to volunteer to work with us and become more involved. We couldn't ask for a better result than that!

This was part of our Cornwall Council funded work - I PACKED THIS MYSELF.

Posted by Susan Roberts at Wednesday, October 06, 2021 No comments:

Posted by Susan Roberts at Wednesday, September 08, 2021 No comments:

A top BBC presenter has discovered that he has an unexpected direct family link to Camborne and that local World War One hero Dr William Blackwood was his great grandfather.

BBC Radio 3 presenter Petroc Trelawny grew up near Helston and attended Helston School. He is the face of the BBC Proms and currently presents a weekday morning show on Radio 3. On New Year's Day 2020 and 2021 he was the host for the BBC broadcast of the Vienna New Year's Concert.  For more about Petroc Trelawny, click here.

Until hearing of our research into the 25th Field Ambulance and the Camborne miners in World War One, he had not known of his great grandfather’s wartime heroism.

“Frederick Blackwood, my grandfather, was a GP in St Keverne,” he said. “I knew he had grown up in Camborne, but was not aware of the achievements of his father, William Blackwood.”

In the years before World War One, William Blackwood had trained St John Ambulance teams in the town to help with First Aid provision in the mines. When war broke out, he set off to the battlefields with these men. They joined the 25th Field Ambulance and served on the Western Front throughout the 1914-18 conflict.

A Lt. Col. by the end of the war, Blackwood won the Distinguished Service Order (DSO) with a bar – in other words, he won it twice. This was incredibly rare. In the whole of WW1, 9,881 DSOs were awarded, but only 768 with a bar.

“We’ve discovered many of the descendants of the 25th Field Ambulance who still live locally,” says Bridging Arts director, Susan Roberts. “But until now we had not found any descendants of Dr Blackwood. We’ve been researching his story for several years now and it’s become clear that Dr Blackwood is something of a folk hero in Camborne. There are still - a few - people who actually remember him, others can remember their parents or grandparents talking about him.

“It’s so great to have discovered this connection with Petroc Trelawny which further cements his memory and is something of which Camborne can be so proud.”

Camborne Youth Band followed in the footsteps of Dr Blackwood and the Cornish miners in 2018, to mark the centenary of the end of the war. In the Band was Corey Williams, the great great grandson of one of the miners who played his 100-year-old bugle back on the Western Front.  Click to view a film about this. 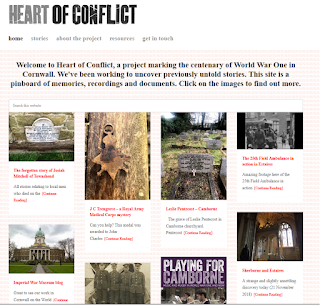 It's two years now since the centenary of the end of World War One. But our research on uncovering local stories continues. Keep up-to-date with developments on our dedicated website Heart of Conflict.

We've recently found more descendants of men who signed up for the Royal Army Medical Corps under Dr William Blackwood of Camborne.

And discovered some heart-breaking stories of young Cornishmen who signed up for the Canadian Expeditionary Force and were killed on the Western Front.

Very good to hear about a total change of direction at the Daily Express BBC Radio 4 - The Media Show, "We're never doing an anti-immigrant story again"

In the programme: "Daily Express editor Gary Jones is Labour-voting, backed Remain, and wants his paper to reflect multicultural Britain. He tells Amol Rajan how he effected a complete change of direction at the tabloid, once known for its dodgy weather forecasts and anti-immigrant stance."

When we started work on migration-related issues in 2006, the Daily Express was one of the tabloid newspapers fuelling anti-immigration feeling with a stream of stories and incendiary headlines.

Hats off, Gary Jones.
Posted by Susan Roberts at Tuesday, February 02, 2021 No comments:

A big thank you to Keno Toriello, who sent me a link to this article in the Guardian: This is what it's like to be an intensive care unit nurse right now.

It's by 'Anonymous' - and a good read. Especially when you get to the powerful and moving final paragraph that rounds it off:

"I’m an EU migrant, like a vast number of people working in intensive care. Many of us were working on New Year’s Eve when the law changed, and we went from being residents of this country to being guests with settled status. When all this is over, I hope there is an acknowledgement that we didn’t leave this country; we didn’t leave our posts, even when it felt like Britain abandoned us. The Brexit vote was about taking back control of our borders, but it turns out they were worried about the wrong kind of foreign invader – it was the virus that was the problem. I hope people will remember that when it came to it, it was those people who chose to make this country home who kept the lights on."

What would the NHS do without nurses like the author?

Keno Toriello, originally from Chile, is working with us on I PACKED THIS MYSELF, our work to break down prejudice against people from overseas living in Cornwall and often playing a vital role in the local economy.
Posted by Susan Roberts at Friday, January 22, 2021 No comments: