An Atlas of Migration 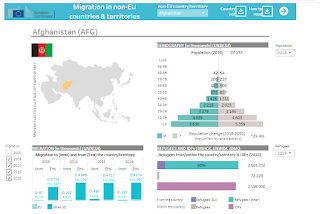 This looks interesting .... The official blurb (below) is a bit technical but click on the link and there's loads of interesting information.  Click here
It's produced by the European Commissions Knowledge Centre on Migration and Demography....


“The Atlas of Migration is an online guide through complexities of data about migration and demography that will help citizens to understand the facts behind migration as well as provide the policymakers with the best evidence. Open to the public, the interactive platform allows users to create and download profiles for the countries or territories they are interested in. Because the data is updated every 24 hours, users can be confident that they are accessing the most up-to-date information available. The information is made available by bringing together harmonised, validated data from 12 international sources. The Atlas provides information on 60 different indicators related to migration, asylum, integration, demography, and development.”

Posted by Susan Roberts at Sunday, February 23, 2020 No comments:

A good quote from an Archbishop

The former Archbishop of Canterbury the Rt Rev Rowan Williams isn't the most quotable person. But I think he got this very right when he was reviewing a book on migration for the New Statesman.
(The Unsettling of Europe: The Great Migration, 1945 to the Present by Peter Gatrell) 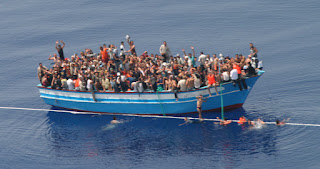 It was a while ago but I saved up the cutting.
Why is so hard for us to see migrants as fellow human beings, he asks?
Imagination  - and artistic initiatives  - can help. He thinks, for example, that The Jungle  - play in London in 2018 weaving together migrants' stories with migrant actors - really showed what could be achieved.

"As in so  many areas, imagination - and the breakthrough into someon else's uinfamiliar persepective - is the beginning of political wisdom, the foundation of a politics that is about more than shifting problems around the board and finding new agents (usually victims) to blame."

Posted by Susan Roberts at Friday, February 21, 2020 No comments: 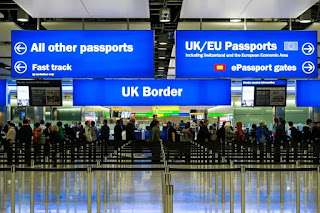 Finally - an idea of what the immigration rules might be in post-Brexit Britain.
A shapshot here on BBC News. A mixed response from employers - not surprisingly.
This has yet to go through Parliament but if it does - these are the main features, according to the BBC ....

Posted by Susan Roberts at Wednesday, February 19, 2020 No comments:

Great to see this article on CornwallLive: what a great initiative by these two women who volunteer at the Polish school which runs on Saturdays in Truro. They're aiming to support the Polish community with as much information as possible in these confusing days post Brexit.

One of them is Marta Przybyl.

“Quite a few families have either left or are planning to," she says. "The Brexit effect started last year and some of our parents don’t speak much English so didn’t feel confident enough to stay. Also nobody knows what is going to happen so many have felt returning home is the safer option.”

Click here for the full article - another good story from the West Briton's Chris Matthews. 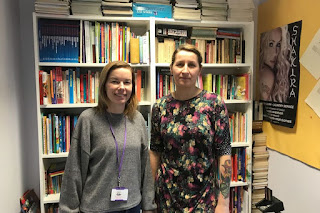 Posted by Susan Roberts at Tuesday, February 18, 2020 No comments:

So - Dutch 17th century painter Aelbert Cuyp was inspired by his countryman Jan Both, who returned to Holland in 1641 after a stay in Rome.
Jan Both started to add Mediterranean light and colour to potentially dull northern landscapes.
And Cuyp was inspired to imitate him - resulting in masterpieces like the one below...
Just shows how travel can broaden the mind.

Posted by Susan Roberts at Monday, February 17, 2020 No comments:

....ending in another this morning at Truro College to discuss delivering our first workshop this year.
Have previously been at the Premier Inn, Helston, to talk to Andrea Gilbert of Inclusion Cornwall, and to Starbucks for a fascinating chat with Beata, originally from Lower Silesia but now living in Blackwater.
And in between a quick visit to look at stained glass windows in Crowan that I'm researching. Saint Cecilia, patron saint of music, and St George. Both here looking very late Victorian and British. 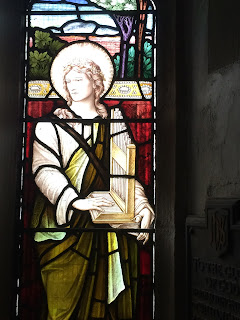 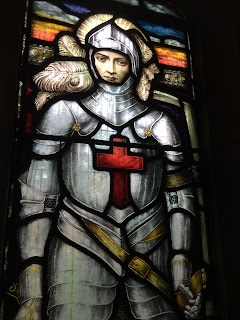 Posted by Susan Roberts at Friday, February 14, 2020 No comments:

Dots on a map 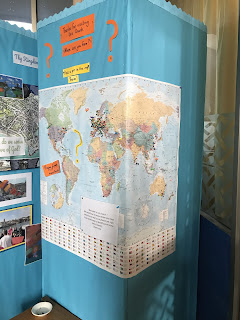 A map for visitors to St Mary's Church, Penzance....
People pinpoint where they've travelled from.  It's interesting to see the clusters - so many from Europe!
It's an idea we might develop in I PACKED THIS MYSELF - breaking down prejudice against people from overseas who come to work here (there's too much prejudice, we hear about it daily.)
Watch this space.
Many thanks to Keno Toriello of St Mary's for forwarding the image to me.

Posted by Susan Roberts at Thursday, February 13, 2020 No comments:

Keno Toriello, who lives in Carbis Bay and comes originally from Chile, has contributed this article to our I PACKED THIS MYSELF project. Keno works three days a week at St Mary's Church, Penzance as parish administrator
On Monday 27th, as we were celebrating 75 years of the Liberation of Auschwitz, the Cathedral of Truro helped to organised a Remembrance Service and a series of displays about the Holocaust. Jewish people living in Cornwall were invited to present their stories. The Service was well attended, and after each presentation a different candle was lit. 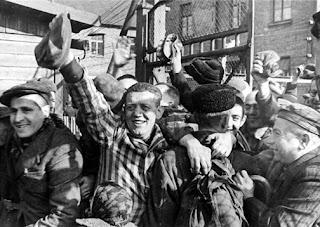 I was invited to participate in one of the stands presenting the experience of migrant workers in Cornwall, as I am helping with the project run by the charity Bridging Arts and the Diocese of Truro called I PACKED THIS MYSELF.

When people approached our stand, I asked them to reflect on how welcoming we are towards foreign labour. In Cornwall we are blessed with large numbers of people coming from Eastern Europe that come to work in temporary jobs, picking flowers and harvesting farms with vegetables. Also, some from Portugal or Romania, who have come to settle with their families, and work in factories processing food, where the temperature is kept extremely low. 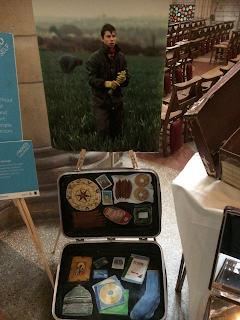 On our display we were showing pieces of arts made by students at Falmouth College, that looked like suitcases. One showing what the migrant workers said they carried with them when they came. Which makes us think, what would you take with you if you had to travel light to another country for few months?


A young Cornish Student made a small statue of himself to show his experience of working in one of these factories during his summer holidays. Everybody around was speaking in different languages, and he found himself completely isolated and alone in his own country. Languages, customs, traditions, they all create barriers among us. 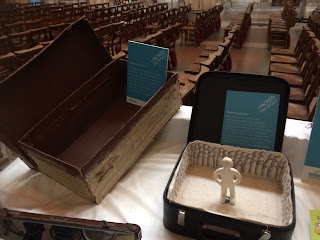 A police officer came to speak to me. He explained that Cornwall Police has a special team of officers working with foreigners, dealing with calls where local people living in Cornwall accuse them of stealing or assaulting people. He explained to us that it might be very few cases, but the word spread around quickly and it has created the perception that there are lots and lots of cases.

My reflection for this day was: How are we making foreign workers feel welcome? When we see them in groups at the Supermarket, how do we look at them? Are we pleasant towards them or do we have an antagonising look?

Are we happy with them as long as they stay out of sight in their caravans in the hidden farms? Or even better if our country makes so difficult for them to come, that we don’t have to see them at all.

Although I have been in Cornwall since 2001, there are changes that I have seen in people's attitude towards me, since the Brexit Referendum. One of the narratives in 2016 was very clear: foreign workers come to England to steal our jobs.

Cornwall has a very high unemployment rate, and it is thanks to foreign workers that come from Eastern Europe and work for nothing, some people argue. It was at this time that I was unable to find an office job for almost two years, and coincidentally I lost the status of permanent resident due to a change in law. It was a very difficult time indeed.

From 2001 until 2016 local people were always friendly and welcoming, and all of a sudden, some people’s views and attitudes were different. Now they had an opinion on foreign labour and several times I was told: Go back to your country.

My answer has not changed… I am home.

My final reflection is to think on how we let radio talk programs, marketing advertising, and political narratives, to influence and change our own thoughts and attitudes towards other people.

This article first appeared in the Penlee Cluster Shout newsletter, February 2020.
Posted by Susan Roberts at Wednesday, February 12, 2020 No comments:

Email ThisBlogThis!Share to TwitterShare to FacebookShare to Pinterest
Labels: carbis bay, chile, Cornwall, I Packed This Myself, Keno Toriello

Didn't know that the UN produced this easily understandable graphic of its Sustainable Development Goals....

Number 10 is key for us as we develop our project I PACKED THIS MYSELF - breaking down prejudice against migrant workers in the UK..... The hyperlinks embedded in the original image probably won't work here - click on this link to find out more.

Posted by Susan Roberts at Tuesday, February 11, 2020 No comments: