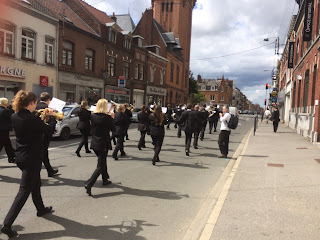 If the Cornishmen who were stationed in Estaires in World War One were able to see this today - they would be very proud. Camborne Youth Band marched through the streets of this northern French town on the way to play in the local park. One hundred years ago men from Dolcoath served here in the Royal Army Medical Corps. The descendants of some of these men were in the group visiting today.
It was thrilling moment. We were welcomed extremely kindly by French officials who stopped the traffic for the march.