Men as Machines - World War One 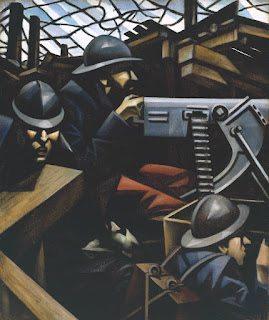 Not  planned - but have recently come across various examples of World War One art.
I'd seen Christopher Nevinson's painting La Mitrailleuse at the Tate before - but forgotten how dark and powerful it is. The men's eyes are hidden. They've become machines.
I also didn't realise that Nevinson had worked as an ambulance driver on the Front until ill health put a stop to that.

We're featuring men from the Royal Army Medical Corps in our exhibition, Heart of Conflict opening at the Royal Cornwall Museum, Truro, in December.

La Mitrailleuse was very highly praised at the time. Fellow artist Walter Sickert said the painting 'will probably remain the most authoritative and concentrated utterance on the war in the history of painting.' However  - Nevinson didn't think so. His later paintings of WW1 are far more realistic. He thought he had to tell the 'truth'.  Odd to say now that these later paintings are more graphic in a way - but lack the power of the abstract or Cubist La Mitrailleuse. I'm no fan of Cubism but it seems true in this case. 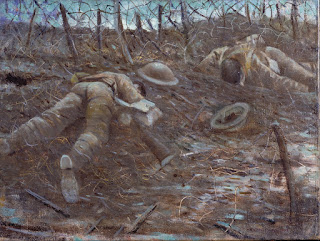