More conversation in Romanian and thoughts about packing 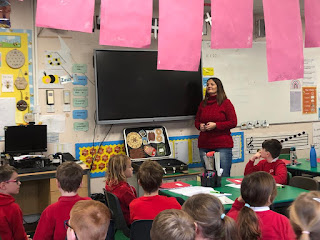 A second day of workshops at Parc Eglos Primary School in Helston, west Cornwall. Yesterday we worked with the early years.

This morning (11 January 2022) we worked with Year 4 students, first an assembly with the full cohort of 120 then two separate classrooms where we learned a bit of Romanian with the help of Mirabela Robatzchi from Bucharest. Mirabela and her family are now making a life for themselves in Helston but when they arrived their young son only spoke two words of English ('red' and 'cat').

Before we practised conversations in Romanian - a few simple phrases to break the ice - students asked lots of questions. How was it for Mirabela's son, aged only seven when he arrived?  Was he sad to leave Romania? Did he make friends quickly?

Mirabela said the teachers at his school drew pictures to help him communicate - if he had a headache - or felt ill.  He did feel scared - and isolated. Language helps such a lot.

Students also wondered what Mirabela's son might have brought with him to remind him of home. Several answers: his favourite toys. A collection of stones (a bit heavy, but precious to him!).

They thought about what they might take with them if they had to make a long journey to build a new life - and what they might have to leave behind. Difficult choices involved, of course, particularly if pets were involved...

This is all part of work to increase understanding and to break down prejudice against the thousands of workers from overseas who play such a vital role in the local economy. It's funded by Cornwall Council via Inclusion Cornwall and is called I PACKED THIS MYSELF.