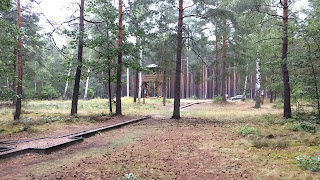 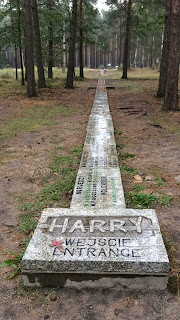 Looking for traces of World War One Prisoner of War camps in Lower Silesia, Poland in September.... came across this, the famous tunnel Harry.  This was the site of the World War Two POW camp Stalag Luft 111,  near Zagan, where a mass escape was staged in March 1944 and immortalised in the film The Great Escape, starring Steve McQueen.
Most of those who escaped were executed by the Nazis.
The remains of the camp are in the middle of these woods on the outskirts of the town.
They are not far from Szprotawa, a town nearby where Devon man Reginald Rice was interned. Rice was one of the 25th Field Ambulance and served alongside Cornish miners from Camborne and Redruth who signed up in 1914 under local doctor William Blackwood.
We don't, sadly, find any traces of what in World War One was called Sprottau POW camp. No one in the town knows about it - and it's a rainy Saturday with few people around to ask.

Email ThisBlogThis!Share to TwitterShare to FacebookShare to Pinterest
Labels: World War One