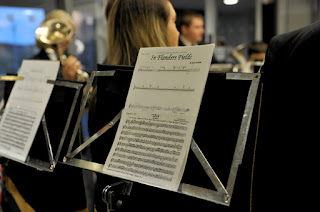 A powerful new exhibition has opened at Heartlands, Pool, marking the centenary of the end of World War One.

PLAYING FOR CAMBORNE: MUSIC AND RUGBY IN WORLD WAR ONE AND NOW runs from Friday 12 October to Tuesday 6 November.

“This exhibition throws a spotlight on the wartime experience of a group of miners from Dolcoath who joined the 25th Field Ambulance and went out to the Western Front in November 1914,” says Susan Roberts, Director of the charity Bridging Arts which organised the exhibition with Heritage Lottery funding.

“The miners, part of Dolcoath’s St John Ambulance team, went straight to work collecting the wounded and dying from No Man’s Land. The following spring, they organised three rugby matches between Cornish and Devon soldiers after Camborne Rugby Club sent out a ball – and it’s these three historic matches have led to the exhibition on now in Pool.”

One by one, the descendants of the men who played have come forward, including the great great grandson of Fred Negus, one of the miners. Corey Williams, aged 13, is in Camborne Youth Band and his family have Fred’s 100-year-olld bugle.

Over August Bank Holiday weekend, thanks to Heritage Lottery funding which covered travel costs, Corey and the Youth Band followed in the men’s footsteps and travelled out to the Western Front.

They played the 100-year-old bugle and took a rugby ball, signed by current Cornwall and Devon teams, to honour the memory of the three famous rugby matches.

They visited:
Estaires, in northern France, where the men were stationed, and presented the rugby ball to the town
Sailly-sur-la-Lys, where a Cornishman from the 25th Field Ambulance is buried
The Menin Gate, Ypres, where they played to a crowd of thousands.

“Everyone in the Band wanted to let local people know about their experience and to thank them for their support in helping to make this happen,” says Susan. “Besides the Heritage Lottery fund, very many dozens of local businesses, organisations and individuals also donated to cover other costs involved in the Band’s trip. We would like to say a huge thank you to all of them.”

A new prize at Camborne Music Festival was announced at the exhibition launch.

The Menin Gate Prize for best young brass band instrumentalist will mark the centenary of the end of World War One at the Festival from now on. The £100 prize is open to young musicians from across Cornwall.

"This is a very fitting legacy of the trip," says Susan. "The Festival organisers hope that it will attract many new young players to the Festival and strengthen Camborne's strong and impressive Brass Band heritage."

“We’re very pleased that Bridging Arts have brought this incredibly powerful exhibition to Heartlands,” says Aidan Botha, Marketing and Events Manager at Heartlands. “Marking the centenary of World War One through the personal accounts of those who travelled out to the Western Front, as recounted through the eyes of their descendants as well as the Camborne Youth Band, demonstrates the collective power of both sport and music in establishing and nurturing strong community ties.”