Battle Beneath The Trenches 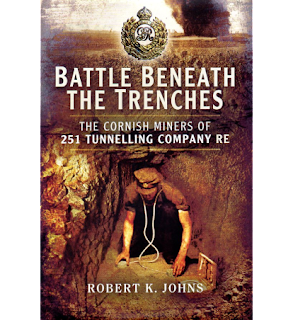 Next up in our project, HEROES OF HAYLE, marking the centenary of World War One ....
The 251st Tunnelling Company
A FREE talk  by Robert K. Johns, author of Battle Beneath the Trenches
All welcome
Thursday 19 July 7pm
Passmore Edwards Institute, Hayle  TR27 4BU
Background:
The 251st Tunnelling Company was formed at Hayle, Cornwall. This Company took over from 170th Tunnelling Company in the Loos area in October 1915, around Cuinchy-Cambrin-Auchy, where it remained for a considerable time. It blew the last mine fired by the British in the Great War, near Givenchy, on 10 August 1917. By April 1918, the 251st Tunnelling Company were in the area between the Lys and La Bassee canal, working on defensive schemes. 251st Tunnelling Company took part in the successful defence of Givenchy when the Allied units there were attacked by German forces in that month.
In addition, specialist tin miners were also recruited from the Cornish mines mainly joining the 251st Tunnelling Company. To attract the tin miners, a per diem of six shillings a day was offered to underground miners, which was around double to that was being paid in the mines.
On Friday, 10 August 1917, the Royal Engineers fired the last British deep mine of the war, at Givenchy-en-Gohelle near Arras. Around 7:05 a.m., the 251st Tunnelling Company on the 5th Infantry Brigade front of the 2nd Division, exploded a mine at the northern end of the brigade sector, near Surrey Crater, which became known as Warlingham Crater.
For more information, please email info@bridging-arts.com
or call 07772 128 014B
Posted by Susan Roberts at Thursday, July 05, 2018