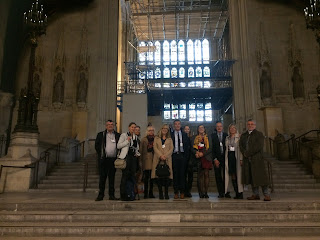 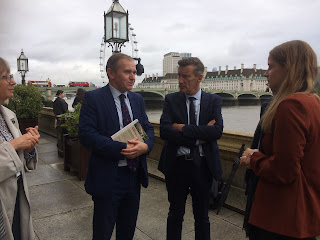 A very good visit to London last week (16 October 2019) from our friends from Estaires, northern France, including the Mayor, Bruno Ficheux.

We have been jointly keeping up links between Estaires and Cornwall ever since we discovered that the 25th Field Ambulance (in which many Cornish miners from Camborne and Redruth were serving) was based in the town for the first part of World War One. We visited with Camborne Youth Band in 2018 and played in the graveyard where one of the Cornishmen is buried. One of the Band is the great great grandson of another of the miners and played his 100-year-old bugle brought back from WW1. We returned to Estaires on Armistice Day 2018 with other descendants of the miners and the local school put on an exhibition and play.

An exhibition about Camborne Youth Band's trip to France in August 2018 is currently on display at Camborne Library.
Posted by Susan Roberts at Wednesday, October 23, 2019