A visit to Newquay Museum with Valerie Grigg 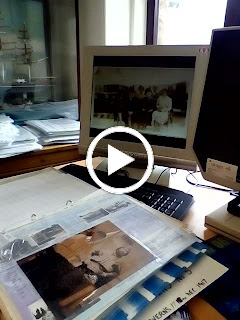 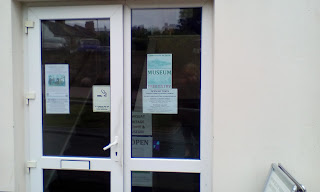 It's a cold and rainy morning - not exactly the best day to visit a seaside town - but our volunteer Valerie Grigg and I are keen to meet the Director and volunteers at Newquay Museum. The great grandfather of Valerie's husband Cliff was a lifeboatman in Newquay - and Cliff can remember stories about the day in 1917 when the boat went down trying to help salvage a Belgian boat on the rocks, and rescue those on board.
There are others in Newquay still who remember relatives talking about that night.  We're keen to feature this story in Heart of Conflict.
Posted by Susan Roberts at Wednesday, June 29, 2016

A War Grave in Stithians

Rhiannon Stevenson, a student at Penair School, has been helping with research in Heart of Conflict. We've tracked down information about a war grave in Stithians. Joseph Martin from the village died in a hospital up north in 1917 after serving in World War One. We don't know much about him or the details, but Rhiannon manages to find his grave.  Hopefully we can start to discover more. Fr Simon Bone, the vicar at Stithians, has kindly offered to offer prayers or hold a short service to honour the grave during the WW1 centenary years.s. 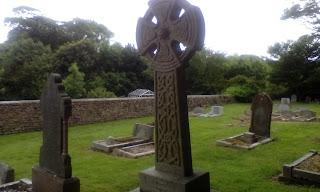 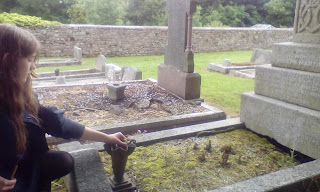 How South African women are reclaiming the headscarf

Thanks to Jos Brient at the African art gallery Azawala for pointing out a fascinating piece on the BBC website on Africa's headwrap -  click here to read.

Inspiration for our competition perhaps? More on that here. 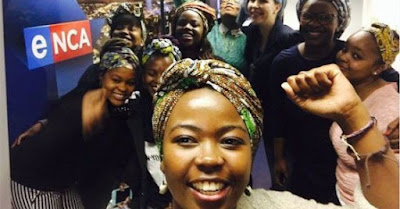 A visit to Richard Lander School

Another outing this week - this time to Richard Lander School in Truro.
We worked with Richard Lander in our project on migrant workers in Cornwall - I Packed This Myself. It's a great school. 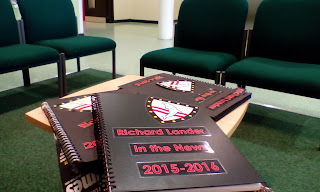 This time we met a group of keen history students and their teacher Julia Brindley. We're hoping that the students will help us to research an album in the Cornwall Records Office as part of Heart of Conflict. It's exam time and everyone is very busy - but there's still lots of enthusiasm. We'll be organising visits to give students extra insight into their research. 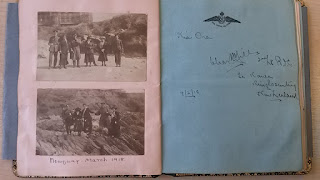 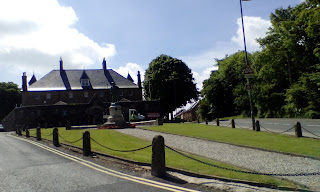 A very good trip to Bodmin to  meet Mary Godwin, Director of Cornwall's Regimental Museum which is a treasure trove for anyone interested in military history. There's a lot about the Duke of Cornwall's Light Infantry, of course - but also lots more. In particular a fragment of the Berlin Wall....

We're hoping to organise school visits to the museum as part of Heart of Conflict.
Posted by Susan Roberts at Wednesday, June 08, 2016

The first time that I've been to the Imperial War Museum for ages - so had not seen their World War 1 exhibition. There's interesting information on the Battle of Aubers Ridge in spring 1915 when Cornishman Thomas Penhorwood was killed - shot in the head. Penhorwood was one of the men who joined a brigade of St John's Ambulance men from Dolcoath Mine, led by Dr William Blackwood of Camborne.
The lack of shells available to British troops at Aubers Ridge provoked uproar in the press: Penhorwood was helping to transport the wounded to dressing stations and would not have had a weapon. But it is poignant to think that the army was in such a situation (particularly as so many munitions were being produced in Cornwall.
The main purpose of the visit was to look at a copy of the booklet on Cornwall's Land Army, published in 1920 by the Truro- based photographer A.W. Jordan.  It's interesting to see all the names listed but disappointing not to see more of his photographs included. The photographs,  held at the Royal Cornwall Museum, are a unique record of these women and WW1. 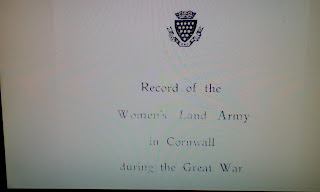 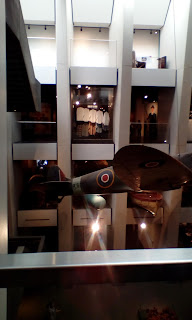 We'll be displaying them as part of Heart of Conflict later this year.
Posted by Susan Roberts at Thursday, June 02, 2016