The constant mediation of the lens

Struck by something that I jotted down from the London Review of Books, talking about the instrusion of images - so many images everywhere, do we really see anything?
Julian Stallabrass wrote this ages ago (in June 2014) in an article 'On Selfies'.
It seems pretty true to me.


"The constant mediation of the lens is disrupting experience and  memory. Photography, unthinkingly and endlessly made and shared, pollutes awareness and the real world and suppresses memory of anything other than the moment when the image is captured." 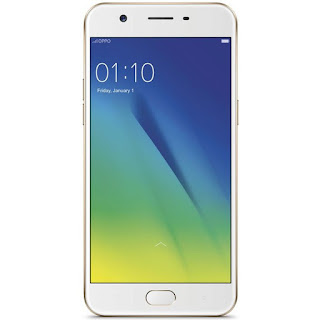 Posted by Susan Roberts at Saturday, April 21, 2018 No comments: 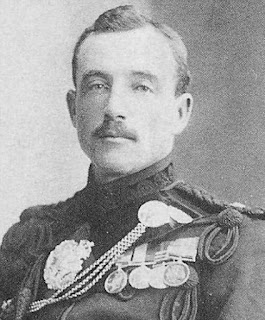 Fresh light on an old window in Paul

Great to see the amazing World War 1 window at Paul Church restored. It had looked impressive enough before - but the new work has revealed so many details. Here are just a few.
It's frustratingly difficult to take photos of the window as so much light streams through it now! Even more reason to go and visit.
The Church is celebrating the restoration with a weekend of activities over the first Bank Holiday in May.
Robert Anning Bell, the Arts and Crafts movement artist, designed this window, honouring local man Lieutenant William Torquil Macleod Bolitho who was killed on 24 May 1915 during the Second Battle of Ypres.   Click here to read more about Paul Church's extremely hard work to get this restoration funded and completed. 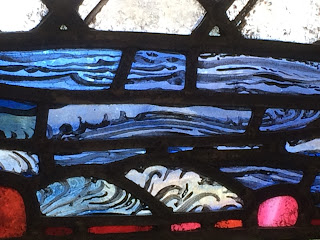 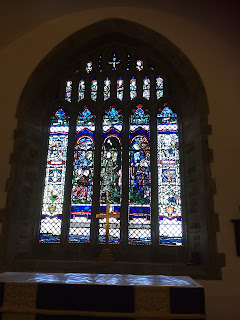 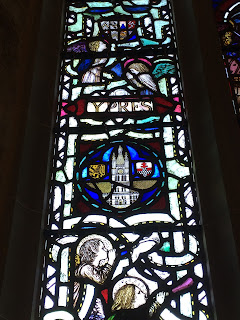 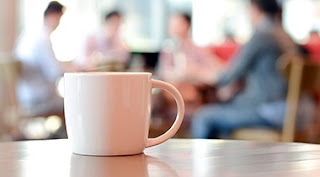 What a brilliant new idea.
Coffee Companions aims to bring together people who just want to have a chat over a cup of coffee. Various cafes around the country have signed up. You need to go to the Coffee Companions website to find one near you - then when you go there, you ask for a 'coffee mat'.
You sit at your table with your mat - and someone knows that you'd like a chat. Or presumably if you spot someone without a mat, you can sit down and make friends with them.
The whole idea of this is to break people out of either self-inflicted isolation (obsessions with phones etc) or to give lonely people the chance for some social contact.
Very many older people can spend an entire day without speaking to anyone.
As Coffee Companions website says:


"Coffee Companions is for anyone, anywhere. Putting the paper down, turning off the phone, just having a chat with their coffee and knowing they aren't intruding - using one of our chat mats is easier than mind reading."

They're just starting off so there aren't many cafes signed up as yet.
But I see that the Cafe at Waitrose in Truro has - so I might just try it.  I really hope that this works, as it has such potential.

Posted by Susan Roberts at Saturday, April 14, 2018 No comments:

It's amazing how colourised old photos can make the past come alive.
The Cornish Studies Library in Redruth is currently showing an exhibition of tinted old photos, including this one of Redruth Young Men's Bible Class on a pre-World War One outing. 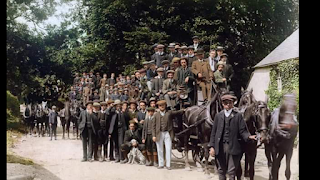 It made me think of Henry Cobb's colour photographs of Warsaw after World War Two - though amazingly these weren't colourised but taken on early colour film.

The daffodil picking in the fields near my house is finished now - but I did find a piece of paper by my gate in the mud. As I wrote a couple of weeks ago,  we know very little more about the lives of migrant workers than ten years ago when we launched our project I Packed This Myself - with the aim of bringing migrant workers and local communities together.

The paper was a receipt from Lidl, Penzance, and had been dropped by a worker leaving a car near my gate. Whoever this was had certainly not been wasting money on fine living. Vegetable fat spread,  A bottle of cider, then a diet of noodle soup, white bread and orange juice.

Not a healthy diet at the best of times - and particularly not when working long days in the freezing cold. 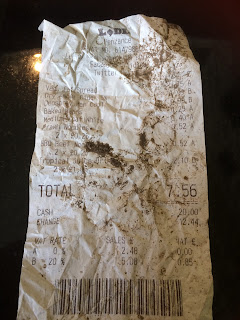 Posted by Susan Roberts at Thursday, April 12, 2018 No comments: 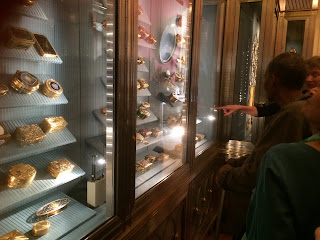 A wonderful visit this afternoon to the Wallace Collection in London with the Elders' group from the Masbro Centre, Hammersmith. We visited the museum's dazzling collection of furniture, paintings, mirrors and china... not to mention the armoury.
We were all very inspired to create our own gold boxes at the end in the Education Centre. Here are a selection. (We'll be following this up with a box decoration workshop back in Hammersmith in May. We love working with the Elders' group - most recently on embroidery).
Our last museum visit was to the V&A - click here to read more.

An interesting talk in Estaires, northern France, on the destruction at the end of World War One. The town, very close to the Front Line, was occupied by the Allies for most of the war, but fell to the Germans in April 1918 - just seven months before the Armistice.

These postcards show the extent of the destruction in the town. Estaires has a special resonance for Cornwall as many Cornish miners were stationed in the town at the start of the War. Camborne Youth Band is planning to visit Estaires in August before playing at the Menin Gate. 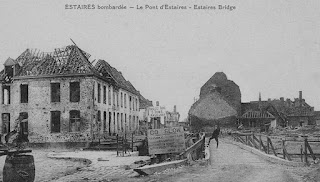 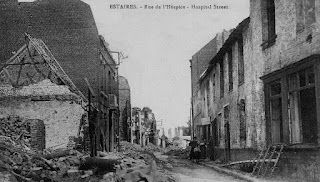 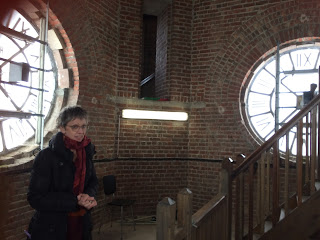 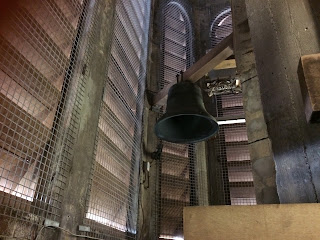 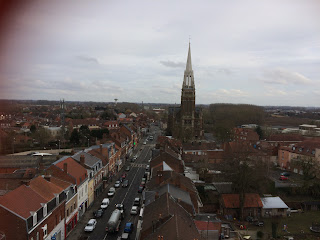 Hopefully the Band will be able to visit the Bell Tower - at the moment they are very busy fundraising for the trip.
Posted by Susan Roberts at Tuesday, April 10, 2018 No comments:

Daffodils, embroidery and a trip to the Wallace Collection 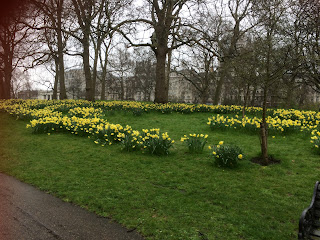 A bleak rainy morning - but daffodils as ever lift the spirits, here at Hyde Park Corner.

They remind me of the wonderful daffodils in our Stitch project by Chhaya Biswas. Chhaya was a member of the Restart 50+ group in Tooting, London, who all embroidered very imaginative swatches. Chhaya chose daffodils, as they were her favourite flower. She had grown up in Bangladesh and studied William Wordsworth's famous poem about daffodils as a young girl.

She loved the poem, but had never seen a daffodil until she arrived in London at the age of 18 and saw daffodils in bloom on Wandsworth Common. 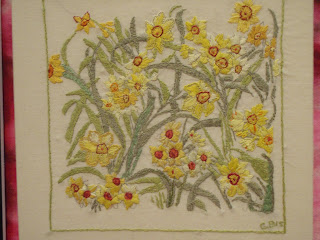 This amazing piece of work went on display at various venues around London.

We're about to do some more work with the embroiderers at the Masbro Centre, Hammersmith - actually not embroidery this time but an exciting new venture. Tomorrow we're off to the Wallace Collection, London, to decorate boxes inspired by their collection of fabulous artefacts.  Will report back.