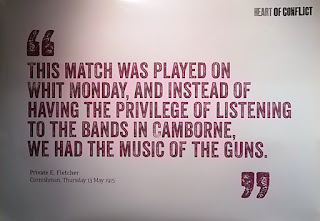 BBC Cornwall’s Hannah Stacey has created a wonderful feature around the Heart of Conflict story of the rugby matches at the Front played in 1915 after Camborne Rugby Club sent out a ball to local men who had signed up. Three matches between Cornish and Devon soldiers were played.

This story, which started with the discovery of a newspaper cutting in the West Briton (May 1915) has grown and grown. The latest discovery: two more grandsons of men who played and a great great grandson - a budding young musician in Camborne Youth Band.

To listen to the original feature, click here.
Derek Head and Chris Negus, the grandsons of two of the men who played are interviewed – as well as local historian Paddy Bradley and Martin Woolcock, who currently plays for Camborne RFC.

We'll be building on this work in 2018 as we're working with Camborne Youth Band, who've been invited to play at the Menin Gate, Ypres, in August. To find out more - and to support the Band (who are working hard to raise funds to pay for the trip), click on this link.
Posted by Susan Roberts at Wednesday, February 21, 2018