Working on Heart of Conflict (our project marking the centenary of World War One) -  visit Helston Museum to see a very old friend, Martine Knight, who started at Leedstown Primary School on the same day as me - more years ago than I like to remember.
Martine - unchanged - has led Helston Museum's fantastic work on marking the centenary of World War one. She and her team of volunteers have researched the names on the town's war memorial (in the churchyard) and created folders on each name. They displayed simple boards with information in a stark and moving exhibition in the autumn. This is just the first stage of a four-year plan to mark the centenary of the war.
Also in the pipeline - improving the town trail (to pass the houses where soldiers lived), renovating graves of those who died at home (Martine herself has done a lot of this), exploring the role of women in the war - and finally in 2018 a trip to the battlefields and war graves.
It's a fantastic effort and grounded in something so solid: the war memorial itself.
The museum is also a revelation. There's so much in it. In the corridor I noticed a grandfather clock decorated with carved bone (left over bones from the owner's lunch!). 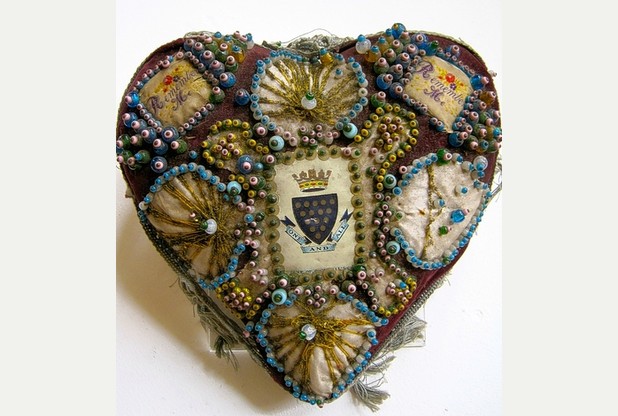 This wonderful cushion was on display earlier in the autumn. It was embroidered by a soldier from the Duke of Cornwall's Light Infantry.  The Cornish coat of arms and motto 'One and All' are visible in the centre.
It was part of a 'therapy' kit given to convalescing soldiers - or even soldiers in Prisoner of War camps.
There's something poignant about the pastel colours, delicate beading and gold threads, worked by worked by someone who not so long previously had seen the carnage of the trenches.
Posted by Susan Roberts at Wednesday, December 03, 2014